8vo. 102, 2 blank, (8) pp. With 9 photographic prints, included in pagination. Original printed wrappers with a coloured illustration of the Kaaba on the lower cover.

An explanatory pamphlet aiming to "enlighten and guide every Muslim pilgrim about the sacred message of Islam and the rules of Hajj". The five pillars are laid out in 14 chapters, including instructions for pilgrimage, prayer, almsgiving and fasting. With a portrait of Sheikh Abdullah Khayyat. The other illustrations show Al Tan'eem near the Mosque of A'isha, a pilgrims' camp at the Al Rahma Mountain of Arafat, a view of the Taraf around the Kaaba, as well as the Al Khaif Mosque in Mona, the ritual "stoning the devil" at Al Aqaba, the Al Safa Palace before its enlargement, a view of the mosque, water and electrical stations at Muzdlifa, and the Mosque of the Prophet in Medina before the beginning of the Saudi rule in 1925.

Slightly duststained. A good copy of this compact introduction to Islamic faith, traceable in a mere 5 libraries worldwide, only one of which in Europe (Leiden University Library). 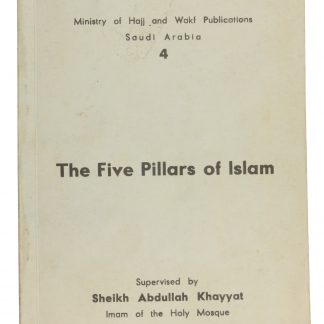