Second edition of this early and concise grammar of Yiddish, first published in 1733 (also at the author's own press).

The Hallensian theologian J. H. Callenberg (1694-1760) was "one of the most influential proponents of early orientalism in the eighteenth century" (Bloomsbury Dict. of 18th-C. German Philosophers, p. 119). He taught Arabic as well as Yiddish and, in 1736, compiled one of the first Yiddish dictionaries. His "Institutum Judaicum et Muhammedanicum", founded in 1728, was the first officially established Protestant mission to Jews and Muslims. The society's private press produced nearly 500 tracts, particularly in Yiddish. Callenberg's orientalist efforts "brought about a revitalization of interest in oriental language research in Halle, and gave impetus to the establishment of orientalism as an independent academic discipline" (ibid., 120); among his followers would be such eminent scholars as Chrysander, Reiske, and Tychsen. 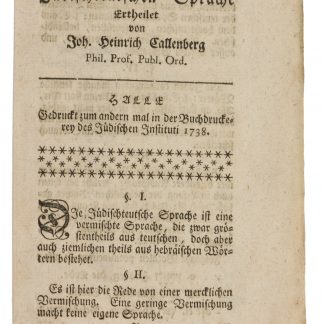