The flora of Styria, Carinthia, and Carniola

Folio (300 x 450 mm). 4 massive volumes of ca. 300 ff. each with up to 600 numbered pages, containing several hundred pressed and dried original specimens of plants, grasses, leaves, and other vegetables. Contemporary brown half calf.

Uncommonly large herbal of Austrian plants, especially from the duchies of Styria, Carinthia, and Carniola (now in Slovenia), compiled in the early 19th century under the guidance of M. W. Sandmann, director of the University Library of Graz. The resulting collection is of great historical interest, as nearly every single one of the many hundred specimens is extensively classified and described, including their Linnéan identification in Latin, German vernacular names, literary references, and information on occurrence, distribution, flowering time, and medicinal and other uses.

While the compilation of herbals had become something of a scientific fad in the 18th and 19th centuries, ensembles of this quality and scope are very rare today. Indeed, in such cases they may remain "surprisingly timely objects of investigation for current researchers: from the dried plant specimens DNA may be extracted, allowing for genetic comparisons of various species. Precise contemporary notes on the place and time of collecting contribute to the ongoing and special value of such herbals" (cf. Vera Hierholzer's notes on the earlier but vastly smaller "Herbarium Vivum Wetteravicum" in the Senckenberg Collection in Frankfurt).

The first volume is prefixed with a long handwritten dedicatory poem and a note on the genesis of the enormous set, explaining that is was instigated by Sandmann for educational purposes and was assembled, at his expense, by various hands which included the Klagenfurt-based pharmacist Alois Traunfellner (1782-1840), the Styrian local historian Carl Schmutz (1787-1873), the Carinthian collector Franz Schnerich (1771-1852), the Graz surgeon Joseph Anker (1771-1843), and the French naturalist Jean Joseph Jacques Holandre (1778-1857). The war events of 1809 (Napoleon's Battle of Graz took place on 24/26 June) interrupted the project, and when the Joanneum museum, established by Archduke Johann in 1811, acquired a complete herbal, work on Sandmann's near-complete collection was not resumed. Indeed, several of the scientific collaborators on the present project, especially Schmutz and Schnerich, had close ties to Archduke Johann's circle and are known as compilers of important herbals of their own (including one of plants from the Lavanttal Valley, assembled by Schnerich, and two large herbals by Traunfellner, all now in the Landesmuseum Kärnten).

At the end of every volume are several blank leaves of high-quality late 18th century paper (some counted in the pagination). Some otherwise empty sheets bear handwritten notes in anticipation of plants that were to be inserted later but ultimately were never collected. The specimens are carefully mounted under strips of paper; in spite of their great fragility the vast majority are complete and in excellent state of preservation. The backing paper shows occasional browning or duststaining but is on the whole very clean. Bindings rubbed and bumped at extremeties but showing little damage in general. 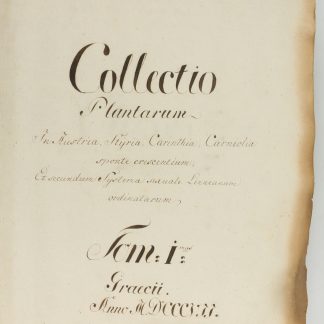