Rare first Renard edition: a splendid example of the publisher's best work. The exceedingly pretty maritime maps are adapted from de Wit's plates, which in their turn had been derived from those of Van Keulen, and must have been fairly obsolete by the time Renard republished them, even with the alterations he carried out. Renard also replaced de Wit's name in the cartouches by his own.

Contents: two-hemisphere world map, supersized maps of Europe (printed from two plates, showing a bear hunt), map of the poles, maritime maps of Novaya Zemlya (with a polar bear hunt), Finland and Lapland, Norway (drying stockfish), the Baltic Sea (with beehives), Denmark and Frisia, the North Seath with Great Britain, the English Channel between Kent and Flanders, the Channel with the Thames estuary (showing a commercial mill), Biscaya (with a naval battle), the Iberian Peninsula, the Mediterranean in two partial maps, the Black Sea and Crimea, the coasts of Africa in 3 maps (with Neptune), the Indian Ocean in two partial maps, the Pacific (with a portrait of Magellan above Neptune's chariot), Central America (hunting crocodiles), Tierra del Fuego, Brazil, the Atlantic with Newfoundland and parts of the coasts of North and South America, the Caribbean, Labrador, and Hudson Bay. At the end are the four uncoloured instructional plates on fortification, assembled as two folding plates (each measuring ca. 70 x 100 cm).

All maps in excellent impressions with the publisher's original hand colour and emphasized coastlines. The cartouches were not coloured, leaving the fine engraved illustrations unimpaired by coating paint.

A wide-margined atlas with the maps numbered in the lower right corner by a contemporary hand throughout. Text and maps clean and nearly spotless; a few repaired paper defects in the text. A small stamp has been erased from the verso of the engraved title; a small rebacked hole in the letterpress title-page. Some tears to the folds professionally repaired, including a larger broken area in the the folding map of Europe, near the Iberian Peninsula, caused by the green paint. The massive binding is somewhat rubbed along hinges and extremeties; minimal chafing to covers, but in all very appealingly preserved. 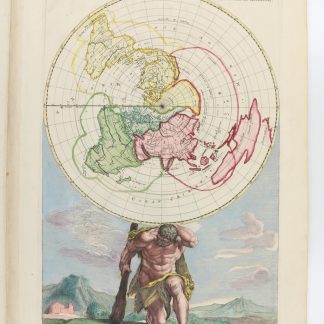