One of Koberger's most monumental achievements: the complete set, from the Kloss collection

The complete four-volume set of this very early and rare edition of a principal work, usually encountered only in separate volumes. This encompassing account of moral philosophy by the Florentine archbishop Antoninus (1389-1459, canonized in 1523) exerted a powerful influence over later studies; it is regarded as "probably the first - and certainly the most comprehensive - treatment from a practical point of view of Christian ethics, asceticism, and sociology in the Middle Ages" (NCE, I, 647).

Volumes 1, 3, and 4 each boast two large penwork initials in red and blue, volume 2 has a large penwork initial in red, blue, and purple that incorporates a long marginal decoration. Entirely complete save for the blank first leaf not present in vols. 1-3, a wide-margined copy printed on strong, light-coloured paper, rubricated throughout and with Lombardic initials drawn alternately in red and blue. First and last leaved insignificantly soiled with minute worming. Occasional marginalia by an early hand. The uniform bindings show a central compartment composed of a blossom role not identified by Kyriss or Schunke on the covers; the spines were not decorated.

Bindings professionally restored. Some damage to several of the brass edge and corner fittings with some loss; clasps and endpapers repaired, using early material.

Provenance: all volumes bear the lithographic bookplate of the German historian and bibliophile Johann Georg Kloss (1787-1854), whose extensive collection of incunabula and early printing was sold by Sotheby's in 1935 in a sale notorious for the auctioneer spuriously claiming many items to have been owned by Melanchthon (Catalogue of the Library of Dr Kloss, of Franckfort a. M., Professor, lot 231). 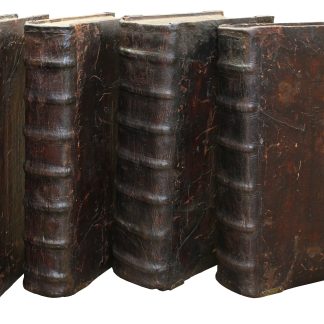