Extremely rare travelogue of Ottoman Arabia, describing a journey from Istanbul to Lebanon, Syria, Iraq, Medina, Nejd and Hejaz by Ali Suad, appointed "mutasarrif" of Nejd by the governor of Basra, Süleyman Nazif, in 1909. The account was first published in the newspaper "Tanin", its first part, "Toward Nejid", comprising 36 serialized issues. Apart from descriptions of Suad's daily routine on the road, the routes he took, his modes of transportation, his accommodation and his diet, it discusses pearl fishing in Basra, the status of the industrial school in Aleppo, the ancient ruins of Palmyra, and the graffiti found in the caravanserais where Ali Suad stayed, as well as the American, British and German explorers he encountered on the road. Coinage, local markets, spoken languages and dialects, the culture of the locals, education and agricultural activities of the indigenous peoples are explained in detail.

Never seen at auction. A modern edition in romanized Ottoman Turkish appeared in 1996.

Slightly foxed in places. Some ink practice letters and words to recto and verso of title-page and wrappers by a contemporary hand.

A unique specimen of Turkish travel literature published only two years before the end of Ottoman suzerainty over Arabia. 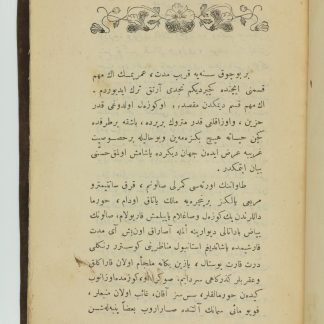