Large detailed terrain map of the Arabian Gulf and the surrounding area with a legend of geographic denominations in English, Arabic, and Farsi, such as "Fort: Qasr (Arabic), Kaleh, Kalat (Persian)". The map shows terrain levels in particular detail and the major roads, railways and telegraph lines. The sheet latitude limits are: 24°-32° north and 44°-60° south, including Qatar, Kuwait, the Emirates, Saudi Arabia, Iran, and Iraq.

The map was published in 1912 by the India Survey Office under the direction of Sir Sidney Gerald Burrard (1860-1953), who was Colonel and Surveyor General of India in that year. He was majorly invested in the geographical and cartographic survey of India, especially the Himalayas, and retired one year after the publication of the present map. The map is based on Frederic Fraser Hunter's (1876-1959) first large scale general map of Arabia for the India Survey Office in 1906-08. Hunter was also involved as editor in the creation of the present Southern Persia map. As the Southern Persia sheet the present map is part of a very large nine-sheet combined map covering the area from the Red Sea to India, called the "Survey of India Southern Asia Series" (1912-45). The present map and a separately published index could be obtained only on application through an officer at the Map Record and Issue Office in Calcutta.

Some slight foxing, a tiny tear on the crossing of two folds, bottom edge frayed. Otherwise in good condition. 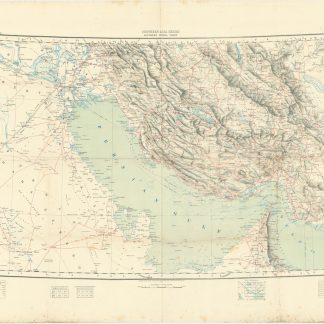