Said-Ruete, Rudolph. Said bin Sultan (1791-1856). Ruler of Oman and Zanzibar. His Place in the History of Arabia and East Africa.

Rare first edition: presentation copy from Said-Ruete to Sir Saleh bin Ghalib Al-Qu'aiti, Sultan of Shihr and Makalla (ruled 1936-56), inscribed in green ink: "To / His Highness The Sultan / of Shiher and Makalla / Saleh bin Galib Alcaity / a token of sincere esteem / by the Author. / London, May 7th 1937". Below this is pasted a printed bookplate in Arabic.

The Qu'aiti Sultanate of Shihr and Mukalla, in the Hadhramaut region of the southern Arabian Peninsula (now Yemen), was the third largest kingdom in Arabia after the Kingdom of Saudi Arabia and the Sultanate of Oman. While the monarchy was toppled by communists in 1967 and Sultan Ghalib II was forced to abdicate, the Qu'aiti royal family still thrives in exile. 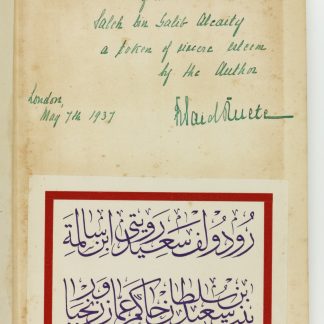