Scarce, highly detailed charts of the Red Sea based upon hydrographic surveys of the British East India Company carried out from 1804 to 1805. The first encompasses the southern part of the Red Sea, the second shows the northern part. They feature the tracks of several survey vessels, including Alexander Dalrymple's Swallow of 1776, as well as soundings, the locations of shipwrecks, and numerous other details. On land, trails lead from Bernice and Cosire to the Nile, and a note near Tor indicates "3 days Journey for Camels to Suez, here is good water". Engraved by Cooper after the English surveyor and mapmaker John Outhett. The charts were released with George Annesley Valentia's "Voyages and Travels" (London, W. Bulmer & Co., 1809). 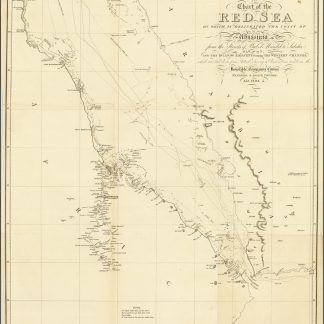