Oblong 4to. [70] gray, white and blue album ff., containing 67 sketches with accompanying manuscript captions and descriptions. 66 sketches in pen & ink and pencil, mostly signed by Blackwell, depicting Swiss, Burmese and Indian panoramas and domestic scenes, buildings, events, animals and inhabitants, mounted and bound in, most accompanied by manuscript captions and descriptions by Blackwell and sometimes by a later hand. There is also 1 print (ca. 1795/1800?) showing a "rhahan" (priest) drawn by Singey Bey and engraved by Thomas Medland. Half black morocco, black decorated paper sides, gold-tooled ornaments on spine. 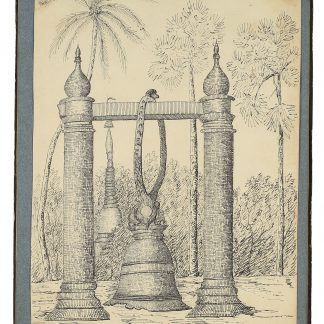