A Treaty with France that Never Was

Large 4to. 1 p. on bifolium with integral address panel ("A Monseigneur Monseigneur Conte de Lester a Paris"). On watermarked paper.

To Sir Robert Sidney (1595-1677), 2nd Earl of Leicester, referring to the hasty return to Paris of the recipient's secretary James Battier, sending (premature) congratulations on a putative Anglo-French treaty, and hoping himself to visit Leicester in Paris in about three weeks' time: "Mr. Battiers dispatch hath bin so uncertaine, as I prepared not for it till I should understand of a certaine time pitched for his departure; and the knowledge of that came not to me untill this very instant that he is going, w[hi]ch maketh it too late for me to trouble y[ou]r ho[nor] w[i]th any longer a letter than to congratulate w[i]th you the happy conclusion of the treaty you have carried and effected w[i]th so much honor. I hope about 3 weeks hence to wayte upon y[ou]r ho[nor] in Paris. In the meane time I humbly kisse y[ou]r handes and rest y[ou]r ho[nors] most humble servant [...]".

In April 1636 Charles I had sent Leicester as Ambassador Extraordinary to Louis XIII of France, seconding the mission of the Ambassador in Ordinary, Viscount Scudamore, whose negotiations with the French had proved unsuccessful. Despite working hard for a projected Anglo-French agreement, other factors (such as intrigues against Cardinal Richelieu and secret talks with the exiled Marie de Medici) doomed the treaty from the start.

Kenelm Digby, the elder son of Sir Everard Digby (1578-1606), executed for his part in the Gunpowder Plot, was a man of many parts, including those of a courtier (he was a friend of Charles I and was known to Cromwell), poet, pirate, alchemist, book collector, and inventor. He travelled extensively, fighting Venetian galleys off Iskenderun and living successively in France and Italy. "In 1657 his increasingly poor health led Digby to take the waters at Montpellier, where he gave his famous account of the 'powder of sympathy', which cured wounds by being rubbed on the weapon that inflicted them. It was a strong solution of vitriol (copper sulfate) in rainwater, which could be improved by drying in the sun and by mixture with gum tragacanth" (DSB IV, 95). 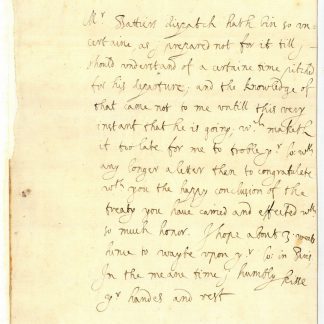