8vo (ca. 160 x 216 mm). Arabic manuscript on paper. 274 ff. (perhaps lacking a Fihrist at the beginning, as suggested by the pagination). 19 lines, per extensum, in informal black naskh with headings and ehphases in red. Title on f. 1r with text in alternate lines of red and black. Pagination and contemporary catchwords throughout. 18th century leather over pasteboards with fore-edge flap and 19th century endpapers; boards and flap show some provincial blind-tooling with Ottoman-style central medallions and corner-pieces with additional fleurons and stamps surrounding these.

A substantial 16th century codex on herbal medicine and pharmaceutical simplicia, constituting a reference work for medication and the application of practical remedies. The physician and astronomer Abu al-Fazl Hubaysh was given the title "al-Mutabbib" (the doctor) for the numerous medical texts he composed, including the present volume as well as the "Kafiyat al-Tibb" (Encyclopedia of Medicine). Though little is known about al-Tiflisi's working life, he is thought to have lived around 600 H (1203 CE).

The colophon is signed by Ismail bin Abd'ulhaq al-Hamsa Damashqi al-Mutabbib, whose title most probably records the use of the volume by an early medical practitioner. It clearly stayed in such use for several centuries, and an early 18th century ownership inscription to the title-page indicates that it was still then used by another Mutabbib, Afif al-Din bin Sadaqa bin Afif, who worked in the al-Salahi Hospital in Jerusalem. The binding currently housing the manuscript was probably added by Afif, who would have used it at the Salahi Hospital, one of the foremost centres of Islamic medical studies in the Middle East.

A few marginal inscriptions and a few ink ownership inscriptions to title-page, some fingersoiling to margins, else overall clean and very presentable. Binding rebacked and resewn with doubleurs added, some repairs to binding, overall in very clean condition. 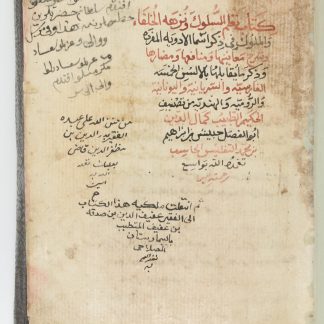