Notably rare first Latin edition of Varthema's influential account of his undercover travel through the Ottoman Empire, Safavid Persia, and India, "one of the most remarkable travel books of the Renaissance" (Blackmer). A copy with significant provenance: from the library of the highly cultured imperial secretary Jacopo Bannisio, with his ownership inscription below the colophon on the last leaf recto.

The "Itinerario" contains the first printed eyewitness account of any place in today's United Arab Emirates: on his return journey from Mecca (which he was the first Westerner to describe), Varthema visited Ras al-Khaimah ("Giulfar") and portrayed the city as "most excellent and abounding in everything", with "a good seaport", and whose inhabitants are "all Muslims". While Montalboddo's famous anthology of discoveries, printed in 1507, contained the first printed reference to the Arabian Gulf region, it was Varthema's work, published only three years later, that offered the first actual report from the region by a Western traveller who had visited the coast.

Ludovico Varthema, as famous in his own time as Columbus, posed as a mamluk named Yunus and escorted a pilgrim caravan to Mecca and Medina. The priority of Varthema's account of Mecca and Medina is remarkable in every respect. It is routinely noted that Varthema's is the first recorded eyewitness account by a European of the Islamic holy cities. Yet more than that, it is the first account of Mecca in print by any author, Muslim or otherwise.

In his introduction to the Hakluyt edition of 1863, G. P. Badger states: "Considering that our author is the first European traveller on record who visited the holy places of the Muhammedans, and taking into account how scanty must have been his previous knowledge of the history and distinctive doctrines of Islam, his description of Meccah and of the Hajj may fairly claim to be regarded as a literary wonder. With but few exceptions, his minutest details are confirmed by later and far more learned writers, whose investigations on the whole have added comparatively little to the knowledge which we possess of the Mussulman pilgrimage through the pages of Varthema; and the occasional correspondence between some of his statements and those of Burckhardt is so striking, as to give rise to the conjecture that that enterprising traveller had perused his book either before or after his own journey into the Hijaz".

Varthema continued to travel for five years (variously adopting the guises of a merchant trader, a doctor, an ascetic mystic, and a master cannon founder), providing a valuable primary witness for the state of overland travel through Asia, just as the Portuguese sea route was taking supremacy. After escaping imprisonment for being a Christian spy by means of the love of a Yemeni sultana, Varthema’s adventures took him to Somalia, through Persia halfway to Samarkand, and eventually to India. After becoming homesick, he gave himself up to the Portuguese and worked as an interrogator enforcing shipping regulations, living through the siege of Cannanore before being rescued by Tristão da Cunha’s armada. The combination of salacious firsthand detail, personal charisma, and picaresque exotic travels made his book an instant sensation. The book contains a prefatory epistle by the translator discussing the discovery of the Americas, which he calls the "true Antipodes".

This translation by Archangelo Madrignano was printed in the year following publication of the first edition in Varthema’s native Italian. The translation was made at the request of the Spanish Cardinal Bernardino López de Carvajal (1456-1523), an important literary patron. As the introduction indicates, Carvajal wanted the book to be available in the universal language as an inducement for Christendom to deepen its knowledge of the Orient in preparation for the recapture of the territories of Jerusalem, of which Carvajal was the patriarch. Copies of any of the early editions are very rare in commerce; this is the only copy of the first Latin edition to have appeared at auction within the last 40 years.

Provenance: from the library of Jacopo Bannisio, with his contemporary ownership inscription "Jacobus de Bannissis Dalmate" below the colophon. Engraved woodcut vignette incorporating the French royal arms, perhaps retained from the first binding and mounted on the front board. Sold Sotheby's, 6 June 2000, lot 332, to Bruce McKinney (bookplate); his sale, Bloomsbury, 3 December 2009.

The imperial secretary Jacopo Bannisio, in its Latin form Jacobus de Bannissis and in the original Slav form Jakov Banicevic (d. 19 November 1532), was a Dalmatian from the island of Curzola, a Catholic cleric and diplomat educated at the universities of Bologna and Padua. His path crossed that of Cardinal Carvajal, the book's sponsor, on many occasions. Bannisio served Maximilian I, both in Germany and in the Caesarean embassy at the papal court in Rome. From 1509 Bannisio had special responsibility for the affairs of Flanders and often visited Antwerp. He held the deanery there and met and corresponded with Erasmus, who defended Carvajal in his dispute with Pope Julius II. From 1519 Bannisio was the intimate secretary of Maximilian’s grandson, the Emperor Charles V, the Habsburg king of Spain. In 1521 he retired to Trent, where he was dean of the cathedral chapter. Bannisio was a friend and patron of artists and humanists; Dürer drafted a coat of arms for him and perhaps also a portrait sketch. His particular interest in world travel is shown by the personal care he took in 1523 to send detailed dispatches to the Republic of Ragusa, the Eastern Adriatic maritime state he regarded as home, with news of Magellan’s circumnavigation. 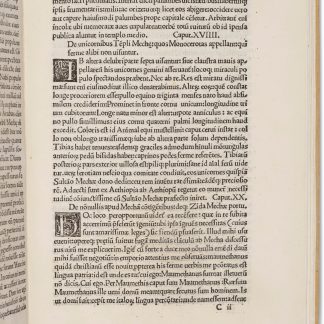