First Latin edition, published a year after the German original edition. One of Glauber's most important publications, this contains among other items an account of his discovery of sodium sulfate in 1625 (cf. Dünnhaupt). The German alchemist and chemist Glauber (1604-70) has been described as one of the first chemical engineers. He here displays an early understanding of chemical affinity; Berzelius (in his "Lehrbuch der Chemie") points out that Glauber was among the first to recognize how sulphuric acid replaces nitric and hydrochloric acid in compounds, while alkali replaces ammonia. It was in the process of this research that he "discovered the 'sal mirabile' that bears his name, 'Glauber's salt'" (cf. Schelenz, 481).

Light browning and occasional waterstaining, but a good, attractive copy. The engraved title mentioned by Brüning is not present in any traceable copy and is probably a ghost.

Provenance: handwritten ownership "de La Roche" to title-page; 20th century bookplates of the bibliographer Guy Bechtel (b. 1931, "Le bibliophobe Bechtel") and of René Alleau (1917-2013), friend of André Breton and director of the Bibliotheca hermetica collection at the French publishing house Denoël (loosely inserted before the flyleaf). 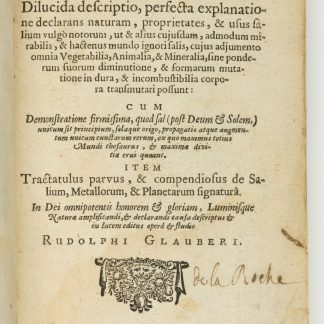