Comments on field-theoretical equations, hinting at Einstein's opposition to McCarthyism

In German, to his former assistant, the mathematician Ernst Gabor Straus, commenting on Straus's work on a unified field theory and proposing the use of a limited group of transformations for the formulation of field-theoretical equations: "The announcement of your work is truly surprising for a layperson like me. It seems like a wonder that the existence of integer-valued derivatives is connected to the existence of a linear differential equation with constant coefficient." After a series of calculations Einstein remarks: "But there is yet another, more physical reason forcing to limit oneself to real Gamma, even though the system of equations is compatible for real and complex Gamma. In the latter case, one can show the existence of nonsingular fields with a negative gravitational. This has to be necessarily excluded". Following further calculations, Einstein proposes the utility of a "particular lambda-transformation" in three bullet points and criticizes a lambda-mu transformation proposed by Straus. He closes with greetings from his daughter Margot and his secretary Helen Dukas. In a short postscript Einstein alludes to his opposition to McCarthyism, using the English term "witch-hunt": "I have variously protested in the very strongest terms against the wi[t]ch hunt, a thankless business however." - Suspected to be a potential communist by J. Edgar Hoover, Einstein was heavily surveiled by the FBI from his 1932 arrival in Princeton until his death and was barred from a possible involvement in the Manhattan Project. As no evidence of an engagement in communist organizations could be produced, Einstein was never summoned to appear before the House Un-American Activities Committee and used his reputation to criticize McCarthyism harshly in an open letter to President Truman in 1953, which was published on the front page of the New York Times.

Ernst Gabor Straus (1922-83) was Einstein's assistant at the Institute for Advanced Study in Princeton from 1944 to 1948. Together they worked on a unified field theory and published three papers on the ultimately unfinished theory. In 1950 Straus graduated from Columbia University with a doctoral thesis entitled "Some Results in Einstein's Unified Field Theory". 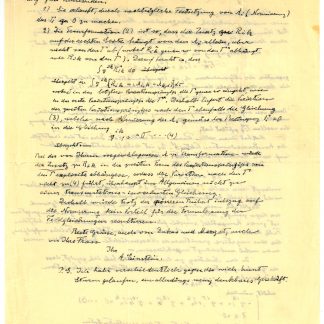