Formula for entering the tribunal of Osiris

This early illustrated fragment written in cursive hieroglyphs contains the end of the 124th chapter of the "Book of the Dead" ("Formula for entering the tribunal of Osiris") and a depiction of a procession of three male gods (one fragmented) equipped with ankhs and was-sceptres. The gods, drawn in red and black ink, wear striped tunics, the Egyptian loincloths called shendyt, tripartite wigs, and false beards.

First appearing on funerary papyri at the beginning of the New Kingdom of Egypt (16th-11th century BC), the "Book of the Dead" is a collection of around 190 chapters, assisting the deceased in their journey through the Douat, or underworld, by virtue of magical spells and formulas. The 124th chapter, also called "Formula for entering the great temple", is supposed to enable the deceased to assume the shape of the mythological heron Bennu and to join Osiris, the principal god of the afterlife. Other than their later counterparts, "Book of the Dead" papyri from the early 18th dynasty are not always illustrated and the vignettes are mostly outline drawings.

Colours are well preserved. The fragment can be attributed to the scribe of three fragments at the British Museum (BM 9954,1/2 and 9926A), which do not comprise vignettes (Totenbuchprojekt Bonn, TM134650). 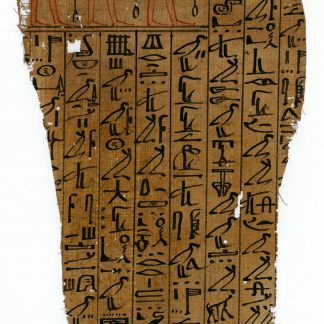