Extremely rare first edition of this important 16th century description of Muslim Africa, complete with the frequently missing third volume, printed at Malaga. "Ouvrage toujours fort recherché" (Brunet). A native of Granada, Luis Marmol Carvajal (1520-1600) took part in the 1535 Tunis campaign of King Charles V against the Ottoman Empire's Mediterranean forces. He was taken prisoner and spent more than 22 years in North Africa, including seven or eight years as a captive in Morocco, Fez and Tunis, where he learned Arabic. In his work, he gives an historical account of Christian-Muslim conflict, as well as of inter-Muslim strife, from the time of Muhammad until 1571, when Pope Pius V created the "Holy League" to drive Ottoman forces from the eastern Mediterranean. However, Marmol discusses not only military aspects, but also and more specifically Muslim North Africa, the Moorish militias, institutions, and customs, paying particular attention to Spanish commercial interests in these territories. He provides descriptions of many Maghreb cities as well of their various sieges and sacks by the Spanish, Portuguese, Genoese, and the Ottomans.

Corners slightly bumped; the first sheets of the third volume have been washed and pressed. A good copy splendidly rebound in the 19th century, with fine provenance: from the library of the great Spanish historian Emilio Lafuente y Alcántara (1825-68), with his signature in vols. 1 and 2. Later in the library of Feliciano Ramirez de Arellano, Marqués de la Fuensanta del Valle (1826-96), founder of the Society of Spanish Libraries, with his armorial bookplate to all pastedowns; additional bookplate of the bibliographer Antonio Moreno Martin of Almería (d. 1990) to the third volume. Auction records list only two appearances of the present work, both copies lacking the third volume (present here). 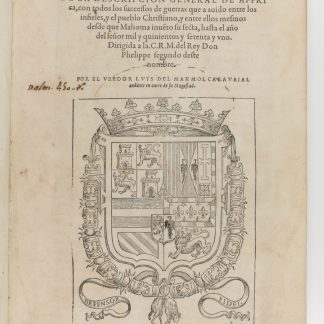