In French, to the architect and archaeologist Julien-David Le Roy (1727-1803) with questions concerning Le Roy's description and reconstruction of the Propylaea at the entrance to the Athens Acropolis. Probably referring to the second edition of Le Roy's seminal publication "Les ruines des plus beaux monuments de la Grece" (1770), Barthélemy inquires about the function of the two annexes of the famous gateway, speculating that they may have been the temple of Athena Nike and a building that held paintings by the famous painter Polygnotus, as described by Pausanias: "you placed two buildings in front of the central structure that form some sort of wings and whose facades have three columns. It seems to me that you do not specify what functions these buildings could have served. Does not the building on the right have to be the temple of Victory without wings and the one to the left the building whose interior walls had been covered with the paintings of Polygnotus?" Despite his desire for clarification, Barthélemy praises highly Le Roy's reconstruction, which was the result of only three months of studies at Athens, and condemns the apparent inaccuracies of the descriptions in Richard Chandler's "Travels of Greece" (1776) and Jacob Spon's and George Wheler's famous travelogue "Voyage d'Italie, de Dalmatie, de Grèce et du Levant" (1678).

Barthélemy is best known for deciphering the Palmyrene and Phoenician alphabets and for his contributions to the early research on Egyptian hieroglyphs. In 1788 he published the imaginary travel journal "Travels of Anacharsis the Younger in Greece" after 30 years of research and writing. Julien-David Le Roy's publication and the travelogues mentioned in the letter were important sources for Barthélemy's detailed descriptions and the high quality illustrations of the book. "Anacharsis" was a considerable success and contributed to the growth of European philhellenism.

Traces of folds and seal. With one minor tear, small pinholes, and traces of old mounting.

Includes a well-preserved early 19th century portrait of Barthélemy in Roman attire with biographical data, published in Paris "chez Ménard & Desenne". Mounted on cardboard and covered with a tissue guard. 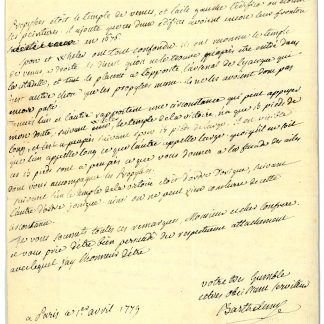