Various places, mostly turn of the century to late 1940s.

1) Ca. 2800 ff. of correspondence from and to Maria Adler, between third parties, and manuscripts, notes etc.

Maria Adler (née Schmalfuß), a native of the village of Kopscan in what is today Western Slovakia, studied at Vienna's Art School for Women and Girls under Ludwig Michalek. Together with other alumnae she founded, in 1903, the "Radierclub Wiener Künstlerinnen", or "Etching Club of Viennese Women Artists" - Austria's first female-only artists' society, as whose first president she served. The society set out to publish an annual portfolio of 12 etchings designed by the members themselves. Also, it provided opportunities for political debate at a time when women enjoyed no suffrage, as well as for artistic and social emancipation; its members were well connected with Auguste Fickert and Rosa Mayreder and their "Allgemeiner Österreichischer Frauenverein" (General Austrian Women's Association). Furthermore, the society offered its members a platform for presenting their own work - a function all the more relevant as Vienna's three important artists' societies, the Künstlerhaus, Secession, and Hagenbund, did not accept women as regular members.

The present posthumous papers of the sister-in-law of Victor Adler, the founder of the Social Democratic Workers' Party, comprises not only correspondence between Maria Adler and others, graphic works (bookplates, sketches, works in coloured pencil, chalk, and watercolour), manuscripts, notes, and personal documents, but also ample source material on the history of the artists' society, including some 50 prints by other members, the society's stamp, and a wide range of stationery, visiting cards, membership card, programmes, annual reports, and regulations, as well as the original portfolios for the annual gifts from 1903, 1905, 1907, 1909, 1910, 1911, and 1912. 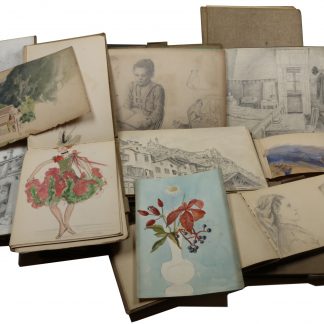