Only edition of this rare work on the history of the Ottoman Empire. Includes biographical entries for sultans and other leading figures, topographical references, as well as architectural and religious entries.

Occasionally, illustrated copies containing a frontispiece, plates, plans and maps have been known to appear, but these do not seem to form part of the regular issue but rather were inserted in specially prepared copies, and "neither the British Library nor the Gennadius copies have them" (Atabey).

An untrimmed, wide-margined copy, occasionally a little stained but altogether well preserved, with a 19th century armorial stamp to the title-page. 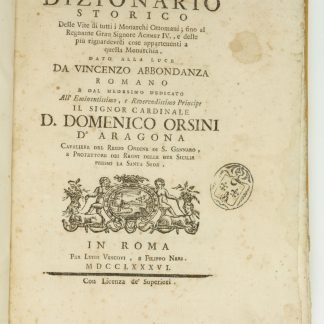