Numerical systems compared: 30 years before the birth of Indo-European studies

Large 4to. 201, (1) pp. (including errata). With a folding engraved plate and a folding letterpress table. Contemporary carta rustica binding.

First edition thus. A highly interesting work comparing the different numerical systems used by various languages and cultures: Arabic, Hebrew, Persian, North and South American Indian cultures, Chinese, Japanese, Tamil, Coptic, Maori, etc. Separate chapters investigate the European adoption of the Arabic system of numerals. The engraved plate shows the shape of numerals throughout the world, while the folding table compares the pronunciation of the word for the number "6" in a wealth of languages.

The Spanish-born Jesuit Lorenzo Hervás y Panduro (1735-1809) counts as one of the most important authors of the Spanish Universalist School of the 18th century, an enlightened, global, comparative approach to historic and scientific theory. This work also appeared as volume 19 of the author's monumental 21-volume cosmographical treatise "Idea dell' Universo" (1778-87), being one of five volumes of the series to be issued separately.

Front inner hinge loosened. Untrimmed in the original carta rustica. An early and little-received work of comparative linguistics, pre-dating by many decades the works of Bopp and Schleicher. 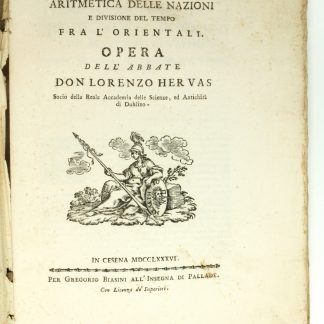