More than three hundred signatures, of a wide range of figures from the early 20th century, including personalities from the military (General F. R. Wingate) and politics (Sidney Webb, Nancy Astor, Sean O'Casey), but also personages from the field of literature (Vita Sackville-West), theatre (Sibyl Thorndike, John Gielgud, Murie Hewitt), science, and many other fields.

With ca. 40 letters by unidentified writers, some of them accompanied by notes by Catherine Hutton, who collected many of these items in the 1820s to 1830s. She was a relative of the mathematician Dr Charles Hutton (1737-1823), and the collection also includes a small number of letters by him. The Hutton collection was later assimilated into the large autograph collection of Captain Peter Johnston-Saint, who worked as an agent for the collector Sir Henry Wellcome. 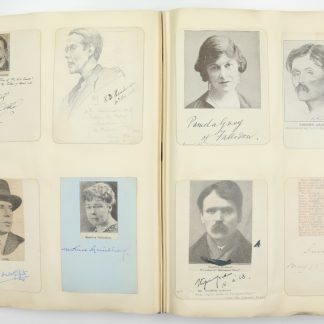