Popular vernacular 'Life of the Prophet'

Alonso's work strives to combine almost every scandalous European rumor about Muhammed into a single narrative: his early career as a thief; his success in 'deceiving the Jews, who take him for a Messiah'; his alarming 'intention to conquer the Four Corners of the World'; and his ultimate demise (his body devoured by dogs, the ultimate insult to Muslims). Readers also learn of his legal system, his military campaigns to take Mecca and Medina, and finally his 'precepts', which are a bastardized version of the Five Pillars: abstention from alcohol; circumcision; fasting; prayer; charity; and pilgrimage. The manner of fasting for 'Ramasan' is described on p. 23, where the main acts of charity are described as the building of hospitals and mosques. An interesting account is given of the Hajj: "They apply themselves with great resignation to the pilgrimage to Mecca, consenting to travel in a procession up to fifty thousand: for which purpose the Sultan appoints a Captain of Pilgrims, who walks with them to avoid any trouble. He [the Captain] holds an Alcoran covered in gold cloth. He rides on a camel, who is covered with flowers during the trip, and who is excused for the rest of its life from the usual labor for which these animals are destined" (p. 24).

OCLC shows just a handful of copies worldwide, including as part of a Coleccion de Varias Historias printed by Manual Martin from 1767-1768, each with separate title-page and register (cf the UCLA and Wisconsin examples). The Spanish Union Catalogue (REBIUN) shows a copy at the Biblioteca de Catalunya and a copy as part of the Coleccion at the Universidad Complutense de Madrid. Palau y Dulcet suggest the present edition as the earliest extant. 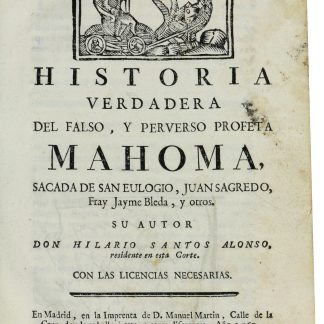