Well-documented socio-political study of the Omani people, describing the situation of the working class, the peasants, fishermen, sailors, herdsmen, the bourgeoisie, feudal lords, property owners, and national minorities. Enchriched with statistical data on the numbers of Omani and foreign workers, their levels of skill, mode of employment and wages, as well as the estimated area of cultivable land, arriving at a total of 37,020 hectares in the country as a whole. The national minorities discussed are the Khojas and Baluchis, the latter being the largest and most widespread minority in Oman.

An English translation was published by the Gulf Committee under the title "Oman. A class analysis" in 1974. 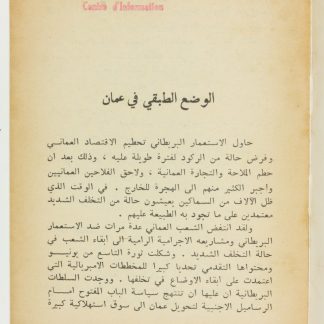