Interesting compilation of historical documents issued by the national liberation movement in Oman and the Gulf, giving an overview of its development, both ideologically and militarily, since the outbreak of armed struggle in Oman on 9 June 1965 up to the PFLOAG's programme in 1974.

An English translation was published by the Gulf Committee under the title "Documents of the national struggle in Oman and the Arabian Gulf" in the same year.

Traces of an old shelfmark to spine and front cover. Extremities lightly bumped. Stamp of ownership of the National Palestine Committee. 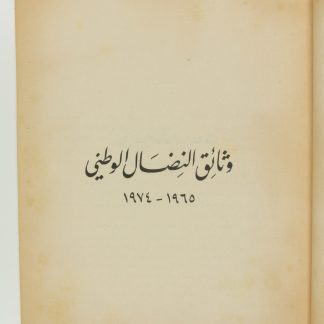