Second recorded copy of this pamphlet announcing a veritable cause célèbre in Early Modern Europe: the Dey of Tunis's first-born son's abjuration of Islam and embrace of the Catholic faith following a daring escape to Palermo. The present work was published within months of the news reaching the rest of Europe, and breathlessly relates the details of Muhammad Chelebi ibn Ahmad Dai's life at the court of Tunis, his introduction to Christianity, and ultimately his baptism in Palermo on 6 May 1646, when he took the name Don Filippo Carlo. From the text it is clear that the entire affair was minutely orchestrated as a suitably exotic public spectacle: "with the lifting of his turban, the sacred ceremony [of Chelebi's baptism] began. Bare-headed, and in a Turkish jacket, he was introduced to the Archbishop [...]" (p. 8).

"Muhammad Cheleby [...] learned to admire European music and comedy from his Christian slaves, who often performed for him. He was so eager to see Europe that he fled with six Christians and nine renegades to Sicily, where he was baptized in the Church of Mazara del Vallo and was given the Christian name of Dom Philippe (of Austria). The news of his conversion reverberated around Europe, reaching even war-torn England. By September he was in Naples, where he was received with 'grands honeurs', after which he headed to Rome. It was reported that he would then go to Spain in order to lead an army against the Portuguese. Instead, Dom Philippe turned to a life of such debauchery that he soon exhausted his royal pensions. So he returned to Tunis and to Islam but continued to live like a European, still admiring ballet, music, and comedy, and (as it was believed in Europe) secretly wearing the cross that the Pope had given him on his conversion" (Matar, Europe Through Arab Eyes, 1578-1727, p. 69).

Paper discoloured (wax stains on verso); small pinhole touching one letter on verso of A1; otherwise a good survival of an ephemeral item. 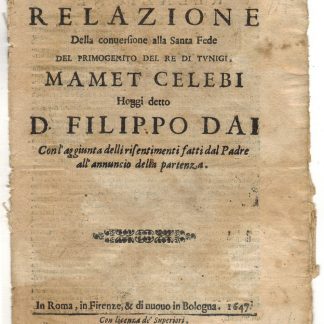