A unique miniature Harry Potter manuscript handwritten and illustrated by J. K. Rowling, signed by her on the title page, and inscribed on the final page by her: "From Harry Potter and the Philosopher's stone, by me". The manuscript relates to pp. 52-3 in "Harry Potter and the Philosopher's Stone" where Harry and Hagrid go to London to purchase his school supplies for Hogwarts: it features passages on the equipment, uniform, and books required for a Hogwarts first year student (including a reminder to parents that "first years are not allowed their own broomsticks"), and each page is accompanied by an original drawing by Rowling, such as a broomstick, a cauldron, a wand, and a witch's hat.

Rowling created this tiny volume for a charity auction in November 2004, alongside 24 other miniature books, all just over one inch tall, which contained manuscripts by artists, politicians, writers and sport stars, including Madonna, Muhammad Ali, David Beckham, Tracey Emin, Lady Margaret Thatcher, and Sir Paul McCartney. The proceeds went to 999 club, a homeless charity in Deptford, south London.

This is the only example of this book ever created. Just one other manuscript by Rowling relating to Harry Potter books has appeared on the market: a handwritten copy of "The Tales of Beedle and Bard". Rowling wrote and illustrated six manuscript copies that were finely bound and given to people who had been important in the publication of the Harry Potter books, while the seventh was auctioned to raise funds for her charity, The Children's High Level Group, and sold for £1.9 ($2.4m) in 2007. 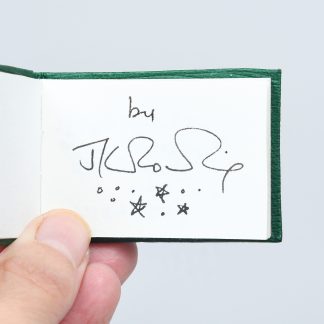