Chronicle of the invasion of Spain, translated from an Arabic manuscript

[Luna, Miguel de]. The life of the most illustrious monarch Almanzor. And of the several revolutions of the mighty empire of the caliphs, and of the African kingdoms. Together with the history of the conquest of Spain by the Moors [...].

Very scarce English translation of this popular chronicle of the 8th-century Moorish invasion of Spain, purportedly translated from an Arabic manuscript that the Moorish apologist and interpreter Miguel de Luna claimed to have found in the Escorial library, but in fact a work of historical fiction of his own composition. Originally issued as "La verdadera hystoria del Rey Don Rodrigo" in two parts (in 1592 and 1600), the present edition, which encompasses only the first part (a second volume announced in the publisher's letter "To the reader" was never published), is the third one in English, following that of Robert Ashley in 1627 and the slightly more common edition published by Leach in 1687. Further translations appeared in French and Italian. It was not until almost a century after its publication that de Luna's book was discovered to be a literary forgery, and even today it remains important as a sympathetic account of the Moorish conquest of Spain.

Binding insignificantly rubbed. Occasional very light foxing; title-page slightly trimmed at foot affecting border. A tiny rust-hole to I5 and a larger tear to K8. Provenance: Handwritten ownership of the Revd. Thomas Watkins (1761-1829), F.R.S., of Pennoyre, Breconshire (dated 1806) to p. 1. Later in the library of the art collectors Howard and Linda Knohl at Fox Pointe Manor, California, with their bookplate to front pastedown. Rare; a single copy in auction records. 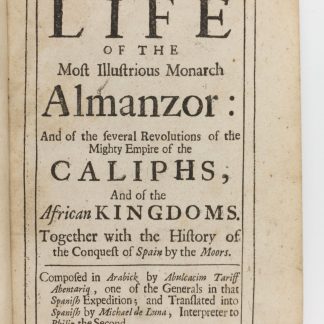