To his friend, the American lawyer and minister Calvin Henderson Wiley (1819-87), about his stay in Rome and his busy schedule: "Never did you know so busy a man as I have been since I landed in England. I heard Martineau [religious philosopher, 1805-1900] the first Sunday in Europe and from the hearing received [more] satisfaction than from looking upon the Coliseum [...] I can never tell you my emotions before approaching the Eternal City - for half hour before we entered the walls of the city the dome of St. Peter's was in view. I was effected to tears as we drove through the city and I beheld blending in everything I saw the pagan and the Christian world, the ancient and the modern, grandeur and poverty, wrath and superstition. We were led as usual by the gods, and so on the very day of our arrival was one of the festivals of the church. The ceremony was performed in St. John Lateran's, it being St. John's day. The audience, beside a few strangers, was composed of soldiers with swords & muskets, filthy barefooted monks, ignorant, lustful priests and blankfaced nuns. The church is gorgeous and the retinue of Cardinals and high ecclesiastics in most elaborate and splendid robes was calculated to empress greatly the sensuous nature. We got through the crowd and stood within five feet of the Pope as he was borne about on the shoulders of his dupes. The old soul has a very pure and amicable face. The only redeeming feature in the whole pagan service. We have visited the Coleseum by day and full moon light. We have 'done' the Pantheon, the Vatican and two Roman Villas. We have stood upon the spots where St. Peter was crucified and where the dust of Tozzo rests. The La[o]coon and the Apollo Belvedere, the Last Judgment by Michael Angelo and the Transfiguration by Raphael are the wonderous creations of art [...]. I have seen a few modern pieces however, with which I have been marvellously delighted. St. Peters is the great inspiring creation of all, it is beyond all conception and description in size, magnificance and munificence of ornamentation. Our funny friend Rogers is enjoying all & to him I am indebted for a congenial companionship without which I should be the subject of an unendurable loneliness [...] If you can make out these lines read them to the boys. Tell them how constantly I think of them & how [...] I ever envy to be with them. God bless and protect you all […]".

With several small marginal tears as well as two strips of old adhesive tape on verso. 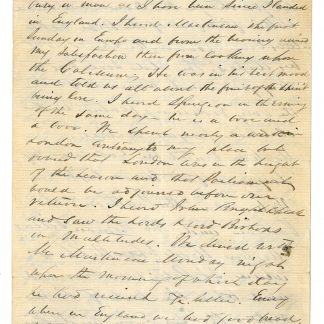