Receipt for monies received for the sales of riding equipment: "Received 6 July 1778 of Thomas Sketchley, the Sum of Two Pounds Two Shillings & Nine Pence in full for a Horse Saddle & bridle sold for me. Phil. Thicknesse".

Previously in the collection of the English novelist Catherine Hutton (1756-1846), mounted on paper with extensive biographical notes in her handwriting, including a description of Thicknesse's travels: "In 1775 he set out on his Year's Travels through France to Spain. At Calais he sold his carriage for twenty two guineas, and bought a cabriolet for ten, and a horse for seven. The equipage was preceded by a footman, literally on foot, a monkey, with his hair en guerre, a red jacket with silver lace, & a pair of jack-boots, rode postilian. Mr. Thicknesse occupied the front seat of the vehicle, Mrs. Thicknesse, and two Miss Thicknesses, with a guittar, two bass viols, and a parrot, were inside, and an English dog rode behind as groom. So delighted was I with these Travels, which were published in 1777 [i. e. 'Year's Journey through France and Part of Spain', 2 vols.], when I was one and twenty, that, an agreeable companion being wanted to accompany the family on a second Tour, I earnestly wished to be that companion [...]".

Loosely enclosed is an engraved portrait of Thicknesse; mounted on paper with a note by the same collector. Thicknesse is remembered for his colourful life as well as for his friendship with the artist Thomas Gainsborough, whose early benefactor he was. Famously, Gainsborough in 1760 painted Thicknesse's wife Ann with the "guittar" in her lap. 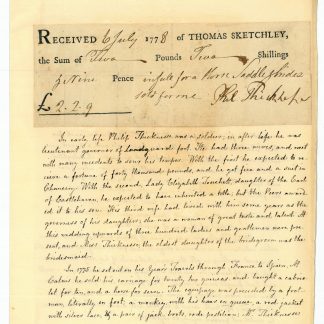