8vo. 4 pp. on bifolium of stationery bearing his London address.

To the American writer Charles Warren Stoddard (1843-1909), written during a concert tour of England, Scotland, and Ireland with the piano virtuoso Hans von Bülow (whom Dolby would later cheat of part of the proceeds). Dolby had just managed Mark Twain's 1873-74 lecture tour of England, accomplished with the journalist Stoddard in tow, whom the humorist had hired for companionship: "I have been railroading half over England since I saw you last & am now about to take a turn by the same process over Scotland and Ireland. Your letter of yesterday reached me here this morning and for fear that you might be uncomfortable at not hearing from me this morning I sent you a telegram saying I would reply to your requirement by to-night's post & enclosed you will find a 'Fiver'. I shall not be in London until next Saturday week, so if you want anything in the meanwhile I send you my addresses, which are as follows [...] In any case acknowledge the receipt of the enclosed as soon as you get it, & if you have any more 'Nursery Rhymes' lets have them! I am up to my eyes in work, pens, ink and paper which must plead my excuse for this scrawl. Dear old Mark! I wonder what his lat. and long. is at the present moment? Bless him wherever the compass, sextant and chronometer may indicate his whereabouts [...]".

George Dolby was famous for having managed the reading tours of Charles Dickens. A little over a week previously he had completed the tour of Mark Twain, who was at the moment of this letter returning to America on the "Parthia", having sailed from Liverpool on the 13th. Although to judge from Mark Twain's account in his autobiography, Dolby and Stoddard would seem ill-matched, they do appear to have got along fairly well. On the final blank page is a limerick punning on the name "Dolby", in Stoddard's hand, apparently a copy of the "nursery rhmye" which he wrote back in thanks: "A youth who was nearly insol-ve-/ -nt prayed at the Post for a Doll V. / And looking alive / He took out a five / And said what a help can a Doll be". 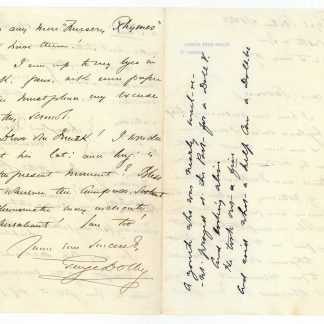