"How much bloodshed have we not unwittingly occasioned!"

4to. 3 pp. on bifolium. With autograph address.

To the writer and fellow philhellene Edward Blaquiere (1779-1832) about the grim situation in Greece during the Greek War of Independence, mentioning typhoid fever as well as poverty and starvation: "I am happy to state that we are now in a more tranquil state than we have been since you left us, your presence here is absolutely requisite, in fact, as the people know you so well, and you know them I believe better. The fever is I am in hopes abating: Dr. Millingen [the physician and writer Julius Michael Millingen, who treated Lord Byron at his death] is almost entirely recovered, and Mr. Hodges [i. e. Byron's friend John Monins Hodges] in a progressive state of amendment, I hope your own valuable health has not suffered [...] Allow me to recommend, that the rest of the money should arrive secretly, and if possible in the night, for as you may suppose we have so many hungry mouths here, that the simple idea of the arrival of money sets us all agog. How much bloodshed have we not unwittingly occasioned, how much disorder and how much distress to the government!! However, a little money goes so great a way, that I have reason to hope we are set on our legs again for another month at least [...]".

Lord Charles Murray, son of John Murray, 4th Duke of Atholl, arrived in Missolonghi shortly after Byron's death on 19 April 1824. With his wealth and connections, it was hoped he would bring improvements to the struggle, and indeed he paid for the construction of a battery at Missolonghi and translated a work on military fortifications into Greek, but he died at Gastouni, Elis, of a disease on August 11.

Paper slightly browned; a larger tear in the gutter repaired with a strip of paper; three strips of old adhesive mounting tape on blank verso. 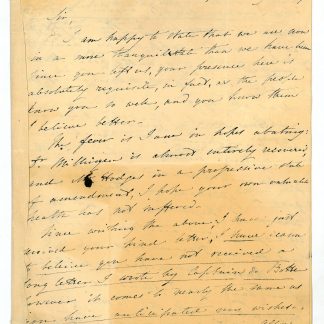