Jugdment at Nuremberg: The Greatest Trial in History

A rare survival: a programme for what Judge Norman Birkett, who presided throughout, called the "greatest trial in history". It was probably handed out to those in attendance, distinguished visitors and members of the press. The trial ran from 20 November 1945 to 1 October 1946. This first trial saw the 21 most prominent members of the Nazi party prosecuted, which included Hermann Göring (successor designate to Hitler), Rudolf Hess (Deputy Führer for all Party Affairs), Joachim von Ribbentrop (Party delegate for Questions on Foreign Policy) and, among others, Albert Speer. A brief note listing their roles in the Nazi Party is given for each man. The defendants were charged with conspiring against peace; planning, initiating and waging wars of aggression; participating in war crimes; and committing crimes against humanity. Of course, Hitler, Goebbels and Himmler had all committed suicide before the trial.

The first page of the document is a floor plan of the court room, naming each of the eight judges: Lawrence, Volchkow, Nikitchenko, Birkett, Biddle, Parker, De Vabres and Falco. Defendants were also given specific seating in order of seniority. The British, American, French, and Russian prosecutors were allotted tables, as were defence counsels and distinguished visitors. A note at the end of the document states that all "information and conversation in the Court Room is transmitted by means of earphones" and was available in the language of the speaker as well as English, Russian, French and German.

These trials were of real importance not only for prosecuting the most notorious war-criminals of the 20th century (more than 200 people were eventually tried), but also for establishing a format which would be adopted by the United Nations, used elsewhere for the Eichmann trial, and its conclusions contributed to the formulation of the Genocide Convention, the Geneva Convention, and the Universal Declaration of Human Rights.

OCLC gives a collation of 8 leaves, but states that the floor plan is duplicated. Indeed, the University of Michigan Law library confirms our collation of 7 leaves. In the present copy, the balcony is indicated in ink on the floorplan. A few traces of folds and an old paperclip impression; altogether very well preserved. OCLC locates merely five copies at the US Holocaust museum, University of South Florida, Michigan Law Library, Oberlin College, and BL; Jisc adds LSE. 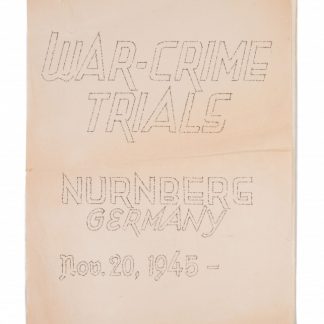