4to. 1 page. With typescript address.

To Peter Johnston-Saint (1886-1974) at the Wellcome Historical Medical Museum in London, who had sent him the description of some photographs of the Luxor Temple: "Please pardon the delay in reply to your letters of December 20th and 31st, but I have just returned to the laboratory after a prolonged absence. I was very glad to receive the translation of the texts describing the photograph of the Birth Chamber of the Luxor Temple. I look forward to comparing the texts with the photograph [...]".

In 1923, Banting received the Nobel Prize in Medicine for his discovery of insulin, resulting in the insulin treatment of disbetes. He remains the youngest Nobel laureate in the area of Physiology.

On headed stationery of the University of Toronto. Somewhat creased, traces of former mounting on verso. With Banting's obituary, clipped from a newspaper, mounted. 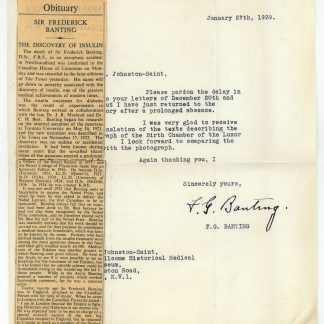