Stephens, John. An Address to the Methodists of Leeds, on the Disturbed State of their Societies; delivered at the Old Chapel, on Sunday the 9th of December, 1827… [bound with] The Report of a Special District Meeting, of Wesleyan Ministers, held at Leeds, on Tuesday, the 4th of December, 1827... Second Edition.

Leeds, for the Stewards of the Leeds Circuits, by Henry Cullingworth, 1827.

Two rare titles concerning the religious dispute known as the 'Leeds Organ Controversy' of 1827. Ignited by the proposal to introduce an organ into otherwise austere Methodist ceremonies, the dispute quickly evolved into a major polemical cause decrying the authority of the national Methodist Connexion over local Methodist affairs, and produced a strong reactionary movement known as the 'Wesleyan Protestant Methodists'. Like many cities in the North, Leeds had long been a bastion of non-conformism, with the Methodists the most important non-Anglican denomination by numbers.

The dispute centered around the new Brunswick Chapel in Leeds which had opened in 1825. It was said to be the largest Methodist chapel ever built, and the size of its congregation in fact made unified hymn-singing very difficult. It was proposed by the trustees of the chapel to build an organ in order to help direct the congregation: but this went strictly against all earlier Methodist precedent, which generally forbade instruments in church. Nevertheless, a strong pro-organ lobby arose and prepared a petition; the anti-organ lobby suggested that many signatories had been coerced or that their signatures were forgeries, and so on. In spite of rulings from the governing body of Methodism, the Methodist Connexion, the trustees went ahead with their organ and in the process barred themselves and some 1000 followers from the Methodist fold. The revolt “furnished the vocabulary of protesting Methodists: the self-styled 'enslaved' who fought for their 'freedom', the 'bondage' and the 'chains' of pastoral, priestly and Conference dictatorship from which they struggled for 'liberation'...” (Proceedings of the Wesley Historical Society).

While some decried “loud and wailing organs” as “sinister and satanic... instruments of the devil”, the author of An Address to the Methodists of Leeds, John Stephens, merely sought to point out that the debate should never in fact have been brought to the judgment of Methodist leaders; and that the constitutional actions of the trustees were also gravely in error. Following the publication of an 'Appeal' by the revolting pro-organists, Stephens decided to publish the proceedings of a Special District Meeting held in Leeds which had judicially laid out the reasoning of the Methodist Connexion – a work also bound into the present copy.

OCLC shows US copies of An Address at SMU, United Library (IL), Duke, and Emory. The Report is held at Emory only. Curiously, no 'first edition' of the Report has been traced in COPAC or OCLC.

“The Story of the Leeds 'Non-Cons'” in Proceedings of the Wesley Historical Society, Vol XXXV (1965). 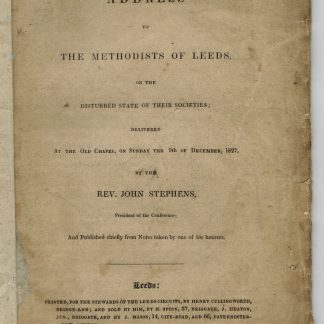