Important Repertory of the Work of Pieter Fierens

Like Thomas de Leu, Fierens left Antwerp for Paris in the early 17th century but maintained ties with his native city, bringing with him the Jesuit visual culture so dominant in Antwerp and lending it to the print culture of other religious orders (#3 below) as well as to secular subjects. Approximately half of the plates in the present collection show Fierens' collaboration with his better-known countryman Martin de Vos.

Fierens is a strangely shadowy figure in most standard reference works – perhaps due to his migration from Antwerp circa 1604. We know that he was received at the Guild of St. Luke in Antwerp in 1597 and that he associated there with Rubens' Franco-Flemish agent Melchior Tavernier. Thieme-Becker also notes that Fierens became naturalized as a French citizen in 1607 and eventually went on to become 'Graveur du Roi'. Fierens is so poorly documented (a mere half-column in Old Hollstein) in the standard repertories and collections that with few exceptions there is no bibliographical control over which prints of his were issued in suites, and which were issued separately. On the basis of format we believe that they are not book illustrations, but we have erred on the conservative side in assigning prints to complete suites, possibly incomplete suites, and separately-issued prints. It is hoped that future research will catalog the oeuvre of this engraver in more detail.

The present prints are offered as loose sheets, having been removed by us from the later backing sheets on which they were mounted, as found in eg the British Museum. They are generally in fine, dark impression, maintaining original margins. Two plates have minor faults, described below.

In the Eight Beatitudes and Ten Commandments, we see exemplary scenes from the Old and New Testaments to illustrate the precepts delivered in the Sermon on the Mount and on the tablets presented to Moses. In the Tenth Commandment, for example, (against coveting thy neighbor's house) shows 1 Kings 21, in which Ahab and Jezebel have their neighbor murdered in order to take over the vineyard which he would not sell to them. The Third Beatitude (“Blessed are the meek...”) depicts Mary Magdalene washing Christ's feet with her tears in order that her sins be forgiven.

Set of 10 plates chronicling the early days of the followers of St. Francis. The title plate (?) features two Franciscans kneeling in prayer before a heavenly apparition of the Instruments of the Passion arranged into the shape of the letters 'IHS'. The 9 further plates, engraved by Fierens after the designs of de Vos, depict kneeling Franciscans adoring the Virgin Mary; St. Francis receiving the stigmata; St. Francis kneeling before Christ in Heaven while his disciples are blessed by Angels below; St. Francis receiving the Word of God directly; the Companions of St. Francis gathered around his deathbed; St. Bernard the Protomartyr contemplating Christ on the Cross while bearing the instruments of his own crucifixion; and an unidentified Franciscan on a cross, being subjected to the fantasies of both Heaven and Hell.

Charming set of very fine engravings illustrating the story of Jonas and the Whale, after the designs of de Vos (through untraced under that name in Hollstein).

An extremely clever conceit featuring the Instruments of the Passion arranged into a 'coat of arms' for Christ. Similar in concept to the Instruments of the Passion conceit found in the title plate to #3. Apparently a standalone print; we have compared a suite of armorials attributed to Fierens (Armes & blasons des chevaliers de l'Ordre du Sainct Esprit, 1623) – but that is of a much smaller format (160 x 105 mm) and design. This print in particular shows the combination of piety and wit one associates with the Antwerp Jesuits.

Attractive series of Greek statues representing the signs of the Zodiac. The title print features a Mannerist-bordered cartouche held by putti, above winged Zeus supporting a terrestrial sphere on his shoulders.

Attractive series of Greek statues representing the planets, the sun and the moon. The title print is a slightly larger re-design of that found in # 7 above. 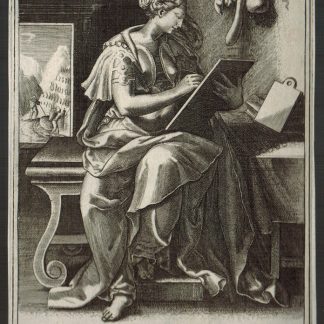