On the Passion of Christ, Dedicated to a Lady-in-Waiting

Rare sole edition of this Flemish devotional work on the Passion, curiously dedicated to a princess’ lady-in-waiting. It is illustrated with seven full-page engravings by Cornelius Galle, son of Philip, after the painter and draughtsman Antoine Sallaert. Although they cannot be considered proper emblems with mottoes, Praz mentions de la Serre and his devotional books passim in Studies in Seventeenth-Century Imagery (Vol II, p. 133).

The present work bears a curious dedication to the lady-in-waiting of the daughter of Holy Roman Emperor Philip IV. 'Demoiselle' d'Arschot, as she is called, is pictured in the engraved frontispiece as an adolescent girl, already exemplifying the virtues of a pious noblewoman. She clutches in one hand a string of prayer beads, while in front of her is her own personal altarpiece with a candle and crucifix, and a cloth-covered lectern for reading her devotions while kneeling.

The text itself is divided into six chapters, each of which is headed by an engraving incorporating its relevant themes. The text is intended to impress upon the reader the manifestations of God's love, as observed in the story of the Passion. As Van der Vennet notes, the Brussels painter Antoine Sallaert's rich designs are especially suited to Puget de la Serre's Merveilles: “the subjects of [Sallaert's] compositions display on the one hand an attachment to the tradition but at the same time an openness to the new developments which were taking place during the 17th century. While his saints conserve their legendary attributes, certain forms of symbolism, popular during the Middle Ages, disappear... However, neither the Counter-Reformation, nor the doctrines of the Council [of Trent] managed to wipe out the taste for the marvelous; which was fed during the 17th century by religious ecstasies and visions. The great devotional images which Sallaert composed for the graver are full of such raptures...” (“Le Peintre bruxellois”, p. 85-7).

Van der Vennet also speaks highly of the present work in particular: “In Les Merveilles de l'Amour Divin, which appeared in 1633, the master illustrates six episodes of the Passion. The elegance and precision of the designs tends towards a beautiful reservedness in evoking these dramatic subjects. As to the composition of these pages, the images appear so large than one almost forgets their small format. The admirable 'Christ of the Pieta' (fig II) and the persons surrounding him, would have their place on a great altarpiece...” (p. 93).

The engraver Cornelius Galle (1576-1650) represented the second generation of the great Galle dynasty. From 1596-1610 Cornelius lived and worked in Rome, before returning to Antwerp where he collaborated with his father as well as preparing his own plates.

OCLC shows a single US copy, at Harvard. 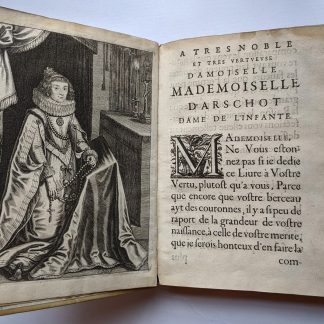