Love Poetry in Praise of Women, by a Young Firebrand

Charming, very rare second edition of this pocket collection of vernacular love poetry dedicated to, and in praise of, women. Martelli, who led a brief but eventful life (see below), died before any of his poetry could be brought to the press. It is interesting to note that these, his love poems, were the first to be published (in 1531), followed two years later by his general oeuvre. The woodcut blocks on the title page are graphically interesting, depicting a woman placing the cuckold’s horns on a man; two lovers embracing; Cupid’s bow poised above two lovers; and so on.

At the instigation of his friend Francesco Salamoni, the young firebrand's poetry finally appeared only after his death. The present work opens with a sonnet “to Women”, followed by 111 stanze “in praise of women” and a further 5 canzoni on similar themes: “Poi che la Donna a ragionar mi spigne...” etc.

While the first edition of 1531 was devoid of illustration, the present edition features a woodcut border, appropriately enough incorporating women in various poses. According to Nagler the monogram belongs to Girolamo Bellarmato, a Tuscan engraver; it appears to have been used in a handful of Zoppino imprints during the 1530s. It appears again in the 1537 third edition of the Stanze e canzoni.

The Martellis of Florence were enemies of the ruling Medici. In 1527 the young Lodovico (b. ca. 1503) killed a guard at the Palazzo San Giovanni and was banished from the city; he traveled to Rome and then Naples, where he became a mercenary, and died the following year. Despite this unfortunate turn of events, Martelli showed great promise as a writer. Eufrosino Bonini dedicated his Grammatices introductionis to Martelli in 1515, evidence of the poet's precociousness even at a young age.

All editions are rare in census. 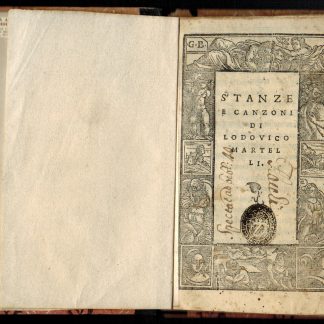