12 etchings, each 14.5 x 9.5 cm on laid paper. Mounted in a charming album of yellow and blue hand-coloured borders also on laid paper, except for the last plate, affixed casually to a blank leaf. Crisp impressions. Some soiling due to adhesion of corners, otherwise very good. Bookplate of the Chateau de Rosny on pastedown.

Complete suite of 12 plates, known in the literature as La Noblesse or La Noblesse de Lorraine, representing the costumes and daily life of six men and six women during the reign of Louis XIII. The figures and their backgrounds are lively and imaginative, executed with the fine detail of Callot's better work.

Lieure describes the set thus: “Charming series of 12 engravings, showing us the costumes of the lords and ladies of Lorraine at the time of Callot. The artist embellished these compositions by adding backgrounds which represent scenes related to the central figure...”. He also points out that according to Callot lore, the models for the portraits were either the artists' friends (according to Bouchot), or his family members (according to Bruwaert). Lieure himself seemed to find it more credible that #550 (man holding his hat under his arm) is a self-portrait of Callot, and #554 is his brother, Jean. The women in #549 and 560 are supposedly his fiancée, and his sister Marguerite is depicted in #556.

The costumes themselves were supposed to represent the nobility of the newly-emerging bourgeoisie in the Duchy of Lorraine: courtly fashion includes feathers, ribbons and rosettes for the men, and lace collars and pearls for the women. In the background we see snatches of duels, a tavern with a valet holding a horse for his master, and so on. Intriguingly, it is not clear whether Callot intended to portray the true nobility or the bourgeois citizens who emulated them. 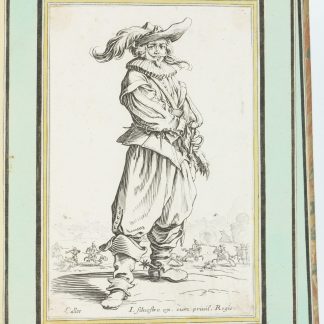