8vo, [19 x 12], 30 pp., 1 folding plate [19 x 28]. Marbled papers over boards. A8-B6 the final leaf blank and wanting. Minor even toning, excellent. Reinforcement in gutter margin of title; publisher’s ms correction on p. 7;  On the last printed page there is a note that the inventor Zacharie has signed the t-p to to distinguish it counterfeits.

Very rare first and sole edition of this commercial prospectus / subscription for a novel kind of horse-drawn-carriage, which would not rest on the wheels subject to the often heater skelter movement of the ride, but whose carriage would be attached on both sides to heavy duty chains suspended above the carriage’s wheels. The position of the carriage in which passengers ride would accordingly be immobile or as immobile as the terrain allowed, making for a more comfortable ride. Zachary promises 5 improvements : speed (force), safety, lightness, comfort (douceur) and economy. Testimonials include the claim that the chains not only made for a comfortable ride, but for a faster one, making the journey from Paris to Lyons in 42 hours. Of interest for the history of financing the manufacture of expensive inventions, and for the nascent history of copyright.

This is as elaborate a prospectus as we have encountered, most likely because riding in moving vehicles can be a risky business. Zachary describes successful tests run before members of the Academies Royales de Sciences, and easily half of the pamphlet consists of patents and privileges, with two blank spaces on p. 13-14 for the potential subscriber to fill in.

Zacharie identifies himself as clockmaker (horloger) and inventor in the city of Lyons. The ICCU record identifies him as one Zacharie-Villiers, who lived in the 17th century, making Delaroche the posthumous editor. We see absolutely no basis for this.

As often with inventions in the late 18th and early 19th c in France, there is a printed note (here on the verso of the last page) announcing that to ward against forgeries, the t-p is signed by the author. One may assume that this was as ineffective as most such efforts, but it is an interesting attempt on the part of the author to safeguard copyright. 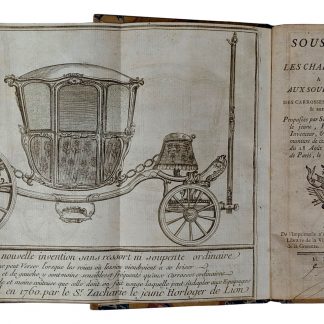