Very rare bilingual German / Hungarian translation of Babbage’s work on logarithms, printed at the expense of the Hungarian Academy of Sciences apparently in order to convey Babbage’s work to interested readers within the Austro-Hungarian empire. Karl Nagy himself was inspired by Babbage’s work to produce his own little-known calculating machine, for which records survive only in manuscript and in a rare Hungarian monograph of the period (see below).

It was Babbage’s experience in constructing his logarithmic tables which convinced him that such numerical exercises could be better produced by mechanical means. His work on a “Difference Engine,” a mechanical computer, was intended to accomplish this laborious chore. The relationship between Karl Nagy (1797-1868) and Babbage (1791-1871) is based on few sources including the present work. In a letter to Babbage dated April 9th, 1833, Nagy expresses his admiration for Babbage’s tables and his intention to introduce his countrymen to them, in effect asking permission to produce the present translation. Nagy also appears to have met Babbage during the former’s short spell in London. Recently-unearthed manuscripts in Hungary show that Nagy in fact drew up plans for constructing his own difference engine based on Babbage, which he published in a small monograph in 1837 in Vienna (cf Andràs Holl, Nagy Károly, Charles Babbage és a Számoló Masinák).

The German and Hungarian prefaces found in the present work are identical, but are not mere translations of Babbage’s own preface to the English editions of 1827 and 1831. Instead, Nagy recounts his ‘discovery’ of Babbage and praises the English tables on several counts: firstly, on their accuracy; and secondly, on their ease of use. At the end of the preface Nagy gives an interesting discussion of his attempts to use different colors of paper to reduce translucence (which confuses the reader attempting to look up small, similar figures). He finds the best color to be a light green paperstock manufactured by a Mr Bonson, but “because this paper would be too expensive for some, I have allowed for half of the edition to be printed on white paper”. It is signed by Nagy from London, dated the 1st October 1834.

The present copy was bound with a German title page and preface (*1-8) as well as a Hungarian preface (A2-7) and the corrected tables (B1-N8, O5), featuring a list of units and conversions in Hungarian printed on the verso of the last leaf of tables. German libraries including the Bayerische Staatsbibliothek, for example, hold copies bound with neither the Hungarian nor the English forewords; however other copies, including those at Cornell and NYPL, are bound with the English title and preface as well as the German and Hungarian.

All early editions (1827, 1831, and the present 1834) of Babbage’s tables are rare in census. COPAC shows just one UK copy of this edition, at the British Library; OCLC adds US copies at Cornell and the NYPL. 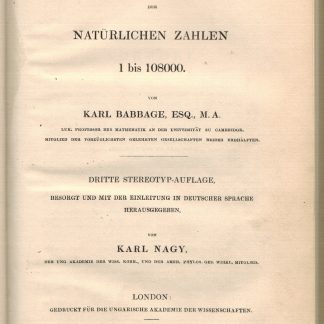