Young Jesuits Dressed Up as Queens and Kings

4to. 15 pp, (1). Large woodcut emblem of the Archangel Michael slaying a demon on verso of title-page, signed I. C. I. Modern wrappers. Light staining to upper margin throughout, otherwise very good.

Extremely rare ephemeral publication providing an account of the yearly Ommegang, or town pageant in Brussels. In this case the festivities - a Cavalcade and ‘Triumph Wagon’ - were organized by the youth of the local Jesuit College.

A full description is given of the procession and the complex allegory behind each figure, including the Latin inscriptions on their flags and standards. The ‘wagons’ seem to have been large devices drawn by suitably dressed-up horses; on the first of these wagons the students even managed to fit a throne upon which was sat Pax, the Roman goddess of peace. The students also dressed up as historical personages ranging from Margherita of Austria to Alexander Farnese to the King and Queen of Spain, sponsored by various guilds. All in all there were four wagons, punctuated by trumpeters, noblemen, and flag-bearers.

Meg Twycross (Materials of Early Theatre: Sources, Images, and Performance, 2017) gives good descriptions of the Antwerp and Leuven Ommegangen – annual pageants which incorporated the carnivalesque themes of earlier traditions into an official, city-wide festival at the height of summer. From the mid-sixteenth century onwards, the Ommegang commemorated the Joyous Entry of the Holy Roman Emperor Charles V alongside its usual religious themes. The present pamphlet, as well as providing a thorough description of an ephemeral festive event, also presents a rather jovial side to the students at the ostensibly austere Jesuit College of Brussels.

OCLC shows copies at the British Library, the Royal Library of the Netherlands (KB), and the Free University of Amsterdam only. 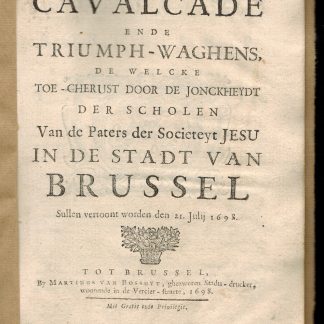