Scarce first edition of this well-illustrated work on “the resistance of solid bodies and how it affects the operation of machines, with particular reference to artillery and both civil and military architecture” (Roberts & Trent, Bibliotheca Mechanica). The author is well-versed in ancient as well as ‘modern’, mainly Jesuit authors on these subjects, and refers to Archimedes, Euclid, Pappus, Vitruvius; Guidobaldo, M. Bettini, Riccioli, Galileo, Gassendi, Kircher, Schott, and Lana (?) Terzi in his text. The engraved plates show a large number of machines for use in construction, demolition or other purposes, each keyed to a passage in the text: balances, scales, levers, wheels, winches, pulleys, screws, canons, catapults, and a number of geometrical diagrams to demonstrate patterns of movement. Addressed to both architects and engineers, the work covers the basic theoretical physics and practical applications involved in large-scale construction in Early Modern Italy. Scaletti (1666-1748), a practicing architect in his native Faenza and beyond, evidently drew on his own personal experience with such projects: his own crowning achievement was the church of Sant’Antonio in Faenza with its distinctive onion-topped bell-tower.

The impressive engraved frontispiece gives an intriguing view of a detailed, if imaginary, construction site in an Italian piazza. Reminiscent of the first plate of Domenico Fontana’s famous "Della Trasportatione dell’Obelisco" (1590), Scaletti’s frontispiece too depicts one of the celebrated problems of Early Modern civil engineering, although it is unclear whether the two men using a multi-storied lever (?) are in fact raising the obelisk in question. 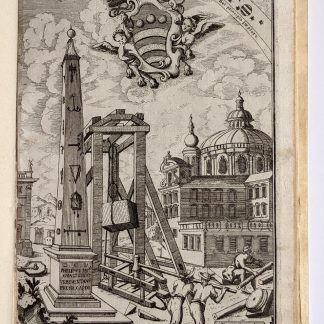