Rare ‘third edition’ of this highly unusual printed treatise describing a Cor Jesu-themed card game invented by a Discalced Carmelite monk. Joseph van St. Barbara here subverts the elements of chance and vice normally associated with card games, replacing them instead with a highly regulated practice of communal devotion, forcing the reader to contemplate a series of religious imagery. The game is played only with the suite of hearts from an ordinary deck of cards. Each of the 14 cards thus corresponds serially to one of the 14 plates, almost all of which employ “heart” iconography reminiscent – if in theme only - of the Cor Jesu Amanti Sacrum of Anton Wierix II, the Amorum Emblemata of van Veen and the Schola Cordis of Bolswert.

Upon drawing a card, the player proceeds to the corresponding emblem in the series, and in conjunction with the other players, meditates upon it— much in the Jesuit fashion prescribed in the Exercitia. Thus the 9 of hearts leads one to plate 9, one of the most striking and memorable of the series, showing a pair of hands and feet disembodied, set within hearts and crucified, with the instruments of the Passion at the foot of the cross. One of the players seems to read aloud or perform relevant sections of the text, whether sermons, lyrics, songs or exegesis. Another of the more memorable images concerns the Ten Commandments: Moses is standing to the left of tablets too large for him to be carrying, with each of the precepts written in Flemish, again within hearts.

The bibliography and sequence of editions is rather confused. The only date apparent in the present work appears in the approbations, 1666. The letter-press title page indicates a third edition, but this may be misleading; the plates are certainly rather worn and the date on the engraved frontispiece has been scored from the copper plate. The STCV dates the activity of Rymers from 1767-1792, giving us a window for dating this edition; typographically it appears to be on the earlier end of this period.

OCLC shows US copies of a ‘third printing’ under a different printer at Illinois, the Huntington, and Penn State; the Newberry has an edition dated 1680. Yale holds an incomplete copy of an edition apparently dated 1666; the Carmelitana Collection in DC also holds at least two editions of this work. 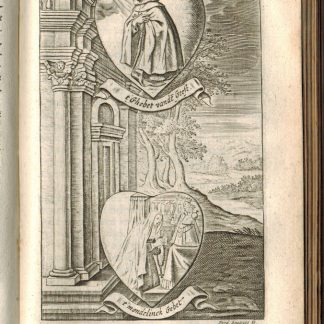