Very rare second edition - ‘reveuë & augmentee’, according to the title-page - of this monumental work by the Scottish astronomer James Bassantin (ca. 1500-68). The work’s large format, extensive program of woodcut illustration, and 36 moveable parts mounted on 14 volvelles required a skilled compositor’s workshop: the first edition of 1557 was printed in Lyon by the imprimeur du Roi Jean de Tournes. By 1585 the Protestant de Tournes had fled to Geneva, where Jean II embarked on the republication of the present work, perhaps in response to the broader flurry of astronomical activity at the beginning of the 17th century. The letterpress has been entirely reset and perhaps indeed ‘revised and augmented’, though the woodcuts for the illustrations seem to have been re-used, indicating that de Tournes had brought them with him to Geneva some 25 years earlier.

Bassantin is mainly concerned with describing planetary motions, which his paper instruments allow the reader to calculate – based of course on strictly Ptolemaic models. Speaking of the first edition, Mortimer comments that “the size of this volume and the extent of its illustration and ornamentation make this an unusually fine example of the attention given to the printing of scientific works at this period” (p. 64). Unlike the 1557 edition, which ends after the final “instrument pour sçavoir l’apparition & occultation des Planettes”, the present work contains an interesting “printer’s note to the reader” as well as an alphabetical index of subjects. The printer’s note indicates a change in the method of mounting the volvelles, which must have been especially tricky given the volume’s size.

James or Jacques Bassantin/Bassantyne was the son of the Laird of Bassendean (Berwickshire), and studied at the University of Glasgow. He settled in Lyon and then Paris as a teacher of mathematics but returned to Scotland sometime around 1562.

With a few notable exceptions, most copies of both the first and second editions of the Astronomique discours are found incomplete. The Honeyman copy of the 1557 edition had 25 parts, but the Horblit copy had the full 36; Mortimer cites 36 parts, although neither copy of the 1557 edition at Harvard has more than 33. The only other copy in America of this second edition – which Houzeau-Lancaster calls “rare”, as opposed to the first edition – lacks at least 3 parts and was sold as such to the Boston Public Library by H. P Kraus in 1949. 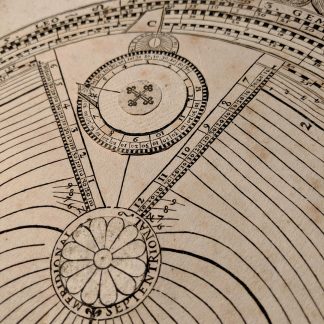