One of the first defences of Arab influence in Western culture

First edition of this Latin translation, from the original Arabic, of books II, VI, and VII of the collection of medical texts referred to under the title of "Colliget" (from its Arabic title "Kulliyyât"), written by the great Muslim physician Ibn Rushd (1126-98, Averroes in the Latin tradition).

This translation is important not only for being the first Averroes version given by a French translator, namely the physician and humanist Jean-Baptiste Bruyerin Champier, but also for containing one of the first defences of the part taken by Al-Andalus Arab intellectuals in the transmission of Greek philosophy in Europe. In his introduction, Champier writes: "When the great flourishing of learning collapsed in Athens, and Gothic barbarity invaded the Roman empire, some Greek books of both the philosophers and the physicians migrated to the Arabs, including the Moors and the Spanish ... especially the books of Aristotle and Galen ... Then it happened that the Arabs translated many volumes of both authors from Greek into their own language. For it is known that the Arabs were most zealous in the study of the humanities, with the result that Averroes, Alfarabi, Avicenna and innumerable others of the same period philosophized on the basis of these books ... and they wholly concentrated on this effort and poured all the force of their intellect into writing interpretations and explanations of both authors. But when Spain was ruled by Alfonso, who had a great thirst for texts, especially in mathematics, since the Moors still held Andalusia, it was easy ... for the books of Averroes and others ... to be brought to Northern Spain where they were put into Latin" (fol. A3v, transl. C. Burnett).

The first part contains the description of the human body's functions and organs (with chapters dedicated to the brain and the spinal cord). The second part deals with the rules of healthy life, while the third exposes the principles of curing diseases.

Some foxing and wrinkling. First leaves slightly loosened. A good, appealingly bound copy of a rarely seen book, last offered at auction in 1984. 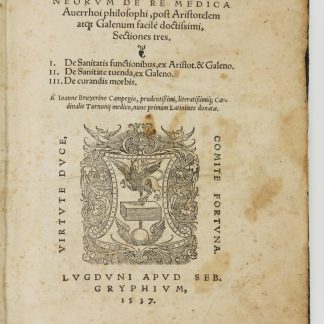