The only exclusively surgical work left us by an Arab source, illustrated with eight extraordinary woodcuts of operations

Folio (210 x 325 mm). 328 pp. Set in roman type. Titles within a ornamental woodcut border, with 8 full-page woodcuts by Hans Wechtlin and numerous woodcuts in the text. Rebound in the 19th century by Ludwig Eichhorn in half roan, brown paper spine label with manuscript title, drawn circle on the back board with the (faded) title within it, manuscript title on the bottom edge, new pastedowns and endpapers.

Two esteemed 16th century medical works, originally written in the 4th and 11th century, here issued together in an early printed edition. Especially the second work in this early printed book is important: it is the only exclusively surgical work left by an Arab source. This treatise was written by Albucasis (Abu al-Qasim al-Zahwari) and was translated into Latin at Toledo by Gerard of Cremona (ca. 1114-87). Albucasis, a native of Cordoba in Moorish Spain, was an Arab physician of the 11th century who is sometimes described as "the father of surgery". The present work, which is the 30th and most popular volume of his 30-volume medical encylopedia entitled "Kitab al-Tasrif", can without doubt be regarded as the principal work of Albucasis, which established his authority. It is the first illustrated surgical guide ever written.

Albucasis' treatise is divided into three books, each treating a different surgical topic: the first, cauterization (a procedure recommended by the Prophet, the medical practice of burning a part of the body to remove or close off a part of it), the second on cutting and bloodletting, and the third on luxations of the limbs. It contains numerous small woodcuts of surgical instruments within the text. The author describes these instruments and how and when to use them. Added to the text of Albucasis are eight rather gruesome full-page woodcuts of specific operations, made by the German renaissance artist Hans Wechtlin (active between at least 1502 and 1526), probably his only surviving work. They show (1) a man wounded by many instruments, (2) a cauterization, (3) an amputation, (4) the extraction of an arrow, (5) bloodletting, (6) a full-page skeleton, and (7 & 8) trepanning operations. These woodcuts were not made specifically for this work, but were re-used by Schott after they had appeared in a manual printed by the German surgeon Hans von Gersdorff in 1517, entitled "Feldtbuch der Wundartzney".

Albucasis' surgical treatise was first printed (in Latin) in 1497. His guide remained a famous pharmacopoeia as late as the mid-16th century. The contents and descriptions contributed to many technological innovations in medicine, especially concerning the tools required for specific operations.

The work of Albucasis is preceded by the "Rerum medicarum libri quator", a therapeutic compendium written by the 4th century Greek physician Theodorus Priscianus, also known under his pseudonym Octavianus Horatianus. It here appears in print for the first time, in a Latin translation, though originally written in Greek, and edited by Hermann von Neuenahr (ca. 1492-1530), a German humanist with particular interest in medicine and pharmacy besides history and theology. The work is better known as the "Euporista" (Easily Obtained Remedies).

Contemporary inscription in ink on last blank page in the same hand as the manuscript title written on the bottom edge. Binding a little worn and showing some stains, with two holes in the front board and two in the back board, probably from (now lost) clasps. A few tiny holes in the first two pages. The first four leaves browned, some minor foxing to the title-page. Paper slightly browned overall. Title in ink on the lower edge. A small tear in the first two full-page woodcuts, printed on both sides of the same leaf, not affecting the illustrations. Some stains in the margins throughout, not affecting the text or plates, otherwise in very good condition. 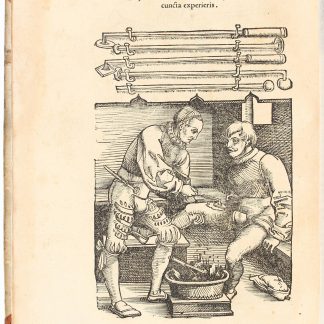