Pretty Viennese and Southern German friendship album from the late 16th and early 17th century. The owner, Matthias Ölhans (Öhlhannß), was a civil servant at the Viennese Aulic War Council: in an entry from 1597 he is referred to as "Imperial War Secretary"; the Nobility Archives of the Empire (today part of the Austrian State Archives' Allgemeines Verwaltungsarchiv) cite him in 1604 as administrator of the Viennese Armoury (OeStA/AVA Adel RAA 299.13, family arms: a lion rampant holding an olive twig in his claws).

Most of the entries are from Vienna, and a few others from Augsburg, Komorn (Komárom), Raab (Györ), and Regensburg. The names of the contributors and their arms are almost exclusively those of commoners, many of which were probably colleagues of Ölhans, including Ahaim, Dietl, Mardl, Perleb, Perschaw, Rittersdorffer, Schoenberg, and Zaiminger, but also the Barons Bartholomaeus and Paul zu Egkh und Hungersbach as well as the noble family of Wolzogen. Near the end the album contains a curious allegorical drawing captioned in Italian. Of great interest for the history of commoners' heraldry.

Interleaved with old paper; some staining and traced of handling; a few edge flaws; edges irregular. The binding re-uses a 17th century blind-tooled quarto pigskin cover, folded horizontally to enclose the octavo volume: the blindstamped arms of Vienna, formerly in the cover's central compartment, are thus offset to the spine. Formerly in the album collection of Friedrich Warnecke, Berlin, dispersed in 1911. 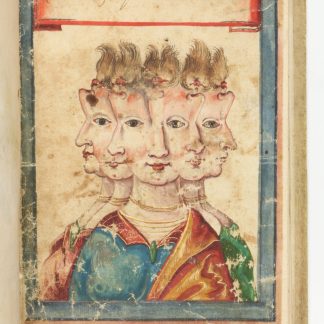