Rare Portuguese report of the 1790 Siege of Izmail during the Russo-Turkish War of 1787-92, which resulted in the sacking of the fortress of Izmail (in the region of Budjak, now Ukraine). The capture of this stronghold, considered impregnable, was seen as a catastrophe in the Ottoman Empire, while in Russia it was glorified in the country's first national anthem "Let the thunder of victory sound!". The Russians began besieging the city in March 1790 and started attacking in December, leading to a bloody battle of 22 December. Ottoman forces suffered more than 26,000 killed, and many others were wounded or captured. The account mentions prominent historical figures, including the Russian general Alexander Suvorov (1730-1800) and the Spanish admiral José de Ribas (1749-1800). 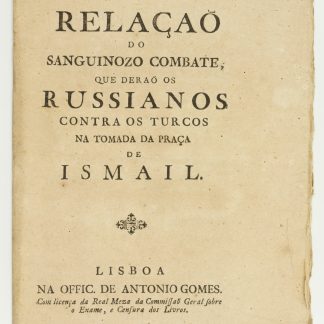