Splendidly illuminated Northern French Book of Hours on vellum. The nearly full-page miniatures (ca. 110 x 80 mm) show extended landscapes as well as interiors, comprising: fol. 14r, Annunciation (at the beginning of the matin of the Office of Mary); fol. 20r, Visitation (Lauds); fol. 26r, Crucifixion (Hours of the Cross); fol. 27r, Pentecost (Hours of the Holy Spirit); fol. 31r, Adoration (Sext), fol. 33r, Presentation at the Temple (None); fol. 35r, Flight into Egypt (Vespers); fol. 38, Coronation of Mary (Compline); fol. 41v, King David in prayer (Penitential Psalms); fol. 50v, Job (Office of the Dead). Wants 4 leaves: before fol. 7 (Gospel lections), before fols. 28 & 30 (Prime and Terce in the Office of Mary), and before fol. 65 (beginning of a prayer to the Blessed Virgin). The finely gilt accents on the figures' clothing are typical of the French book illumination of the period. The borders (on all sides of the first calendar page and surrounding the miniatures, otherwise only to the outside of the text) show characteristically elongated, light brown and blue tendril leaves as well as blossoms and fruits (mainly strawberries and oblong red blossoms) within light brown compartments. The various prayers and lections have small coloured initials; final paragraph lines are completed with red and blue bars bearing gilt decoration.

The localisation of this Book of Hours is conclusively demonstrated by the original note on fol. 13r: "Hore beate Marie virginis secundum usum Rothomagansem" (i.e., Rouen in Normandy). Liturgically of high importance is the calendar (fols. 1r-6v), written in French: the entries are alternately in red and blue, feasts are emphasized in gilt. Names include St Martialis, bishop of Limoges, celebrated in Rouen on 3 July and also prominently mentioned in the litany; St Romanus, bishop of Rouen (23 October); and other bishops of Rouen, such as Ansbertus (9 February), Hugo (9 April), Mellonus (22 October), and numerous saints typical for the region, some of which reappear in the litany (fols. 47v-50r).

The localisation is supported by the art-historical evidence: the tendril forms were developed in Rouen around 1460 by the "maître de l’échevinage", and his highly productive workshop continued the tradition until the 16th century. The compositions and their arched top borders further support this attribution. The date is suggested by the lack of bars in the borders, such as are typical of workshop's ornamentation as late as in the third quarter of the 15th century, and on the other hand by the unadulterated Gothic character of the illumination, which in Rouen tends to give way to Renaissance motifs even in the late 15th century.

Provenance: 16th century old French entries on fol. 70v, concerning the birth of several children of the book's owner. The first entry mentions a fourth son, Pierre, born on 13 May 1563; by 1570 he is followed by four more children who were apparently entered immediately after their birth. While the family's name is not stated, it might be identified from the names of the godparents. An added prayer entered on fol. 13v appears nearly contemporary with these notes.

Occasional very insignificant paint smudges and offsetting to opposite pages with a few very minor stains. Altogether in fine state of preservation. 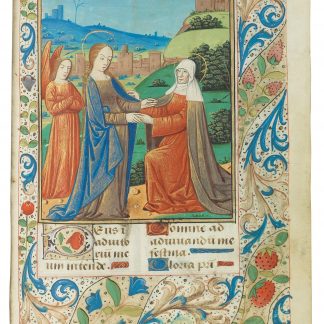